This Friday: The Hun'Gar Games

After the trials and tribulations of Pax’s warlord challenge, battles inside the Death Arena will never be the same! This weekend, fight alongside your team members to hone your combat skills in our newest PvP arena! 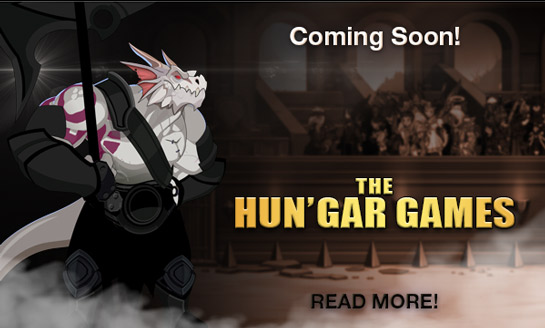 Drakel begin practicing the art of war from a very early age... and to help YOU keep your blades and skills sharp, we're building a new PVP arena and stocking it with NEW rewards!

This week's PvP map is modeled after the team PvP in Darkovia Brawl, but fear not, PvE-ers -  there will also be some PvE quests and rewards if you aren't a fan of PvP. If you ARE a PvP fan, though... this is your time to break out your best class and get to battling!

Over the weekend, our whitehats (these are the security testers with mega-bonus programming skills who help us track down issues and exploits) let us know about a new AC glitch, where some people (less than 30) managed to get a LOT of free ACs due to some broken monthly-quest check code.

Those accounts have been rolled back and disabled. That means 1) they do not get to keep the ACs and 2) they will need to write in to Player Support to have their individual situation reviewed.

If you encounter any glitches or expoits on the testing server, please do not tweet about it or create more accounts to help make AE aware of the issue. The best thing to do is send a report to the Bug Tracker so we can get the devs on it as soon as possible!

Why do you want to ban for glitches like this, but not ones like the DoT room, merge shop, and quest window glitches?

Good question, phantom player! I believe it is the dev team's responsibility to fix glitches when they are in-game as soon as possible so they you guys cannot abuse them (and therefore don't get punished for them. The new server has fixed most of the glitches that people are using, so that will not be an issue very shortly. However, our rules ask people not to discuss glitches, as that can lead to more abuse. (Want a refresher on the rules? Check them out here!)

But when it comes to AC-related glitches, where some people are abusing a glitch to get ACs... that is essentially stealing from Artix Entertainment, because everyone else needs to spend real money to get those ACs and the glitch abusers are getting them for free.