Log in to Battleon to get your own Daimyo Pet

Wish happy birthday to everyone's favorite undead-slaying battle puppy*! Each year on his birthday (today!!!) Artix adds Daimyo into Battleon, so heroes can buy him as a pet. This started in the original AdventureQuest, and has become a yearly tradition. Log in through tomorrow night to celebrate everyone's favorite "fearless undead slaying" battle puppy by getting your own to travel alongside you! 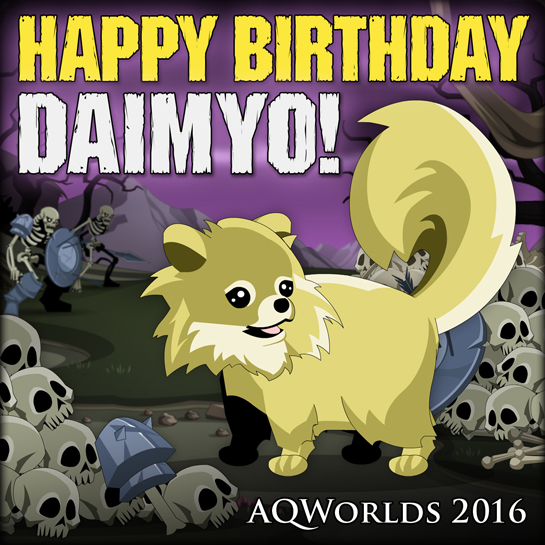 * Wish him Happy Birthday on his official Daimyo FaceBook page!

Though some of you might not know this, Daimyo often comes to the Lab with Artix.* Whenever he's here, we feel EXTRA safe from any potential undead army attacks... or student tour groups... or the lunch cart... or Herormart package delivery men...

Those are some of my favorite days at the Lab, because though Daimyo is FIERCE, he can also be pretty sweet. Especially when he wants a treat.

Daimyo has many fans, but especially rare pet collectors! So many of you get so excited when his birthday rolls around that we began giving him a new outfit every year (Vampire, Derp, DoomKnight, Dage's Legion and more). The goal is to collect as many as you can! For the last couple years, some of the birthday daimyo pets have not made it back into the shop... but this year, you'll be able to choose one Daimyo from the full collection! 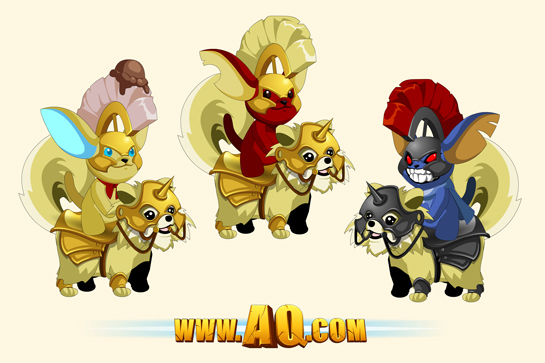 After Daimyo leaves Battleon tomorrow, you'll find merges for all the birthday Daimyos PLUS the three new Moglin Rider Daimyo pets from Artix in the Necropolis map!

Happy belated birthday to Sora to Hoshi, lead AQWorlds and AQ3D in-game moderator, who celebrated this Monday! Her birthday shop is available now in the game menu, PLUS we have a number of players also celebrating birthdays this week, including Kira Nightengale!