Daimon are like the genies or Lore… but Ziri the Daimon is, in reality, simply insane. His believe in his magical wish-granting amulet is so strong that, in effect, he convinces himself that his delusions are real. Sadly, he is the only one who can truly “experience” his wishes. For everyone else, they do not really exist. Fun fact: our Hero is Ziri’s idol, and he would like nothing more than to become his sidekick. 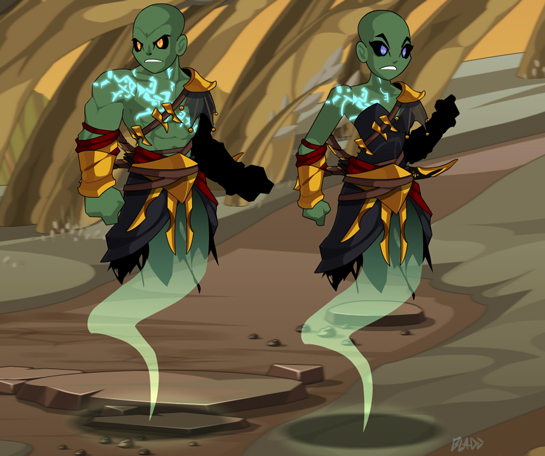 In the (new) tradition of having a class variant for each of the Throne of Darkness Sagas, and trying to keep true to Ziri's NPC Class, we've combined several classes - Mindbreaker, Oracle, and Evolved Shaman - into one to create fun and useful combination that marries psionic attacks with healing abilities. The class also has new icons and animations -- enjoy unlocking them all!

How to Get the Class

You'll find both member and AC versions of the Daimon Class in Ziri's Shop when you /join baconcat.

You have honed your psychic abilities to work in unison with your weaponry, but understand that working in tandem with allies can make the difference between victory and defeat.

Special Effects: Daimons gains mana when they:Strike an enemy in combat (more effective on crits)Are struck by an enemy on combat

Heals up to 4 allies while placing 1 of 5 random buffs on them. The heal is twice as strong if another player is selected. If an enemy is selected, you will be healed for twice the amount.

Fountain of Youth: Moderate heal over time for 15 seconds.

Dumb Lucky: Reduces damage taken and Luck by 10% for 10 seconds.

Forever Alone: Increases mana costs by 10% and reduces Endurance by 10% for 10 seconds.

Targets: both the heal and buffs target up to 4 allies (including self)
Heal: -300% (player full amount and everyone  else 1/2)
Heals self full amount if monster is selected.
Rank Needed: 2
Mana Cost: 25
Mana Cooldown: 12 seconds
Type: Magical

A powerful psychic burst AoE which will hit up to 2 foes. Applies Mental Weakness, reducing their damage by 40% for 5 seconds.

Deals solid psychic damage to up to 3 targets and reduces enemy haste by 30% while increasing yours by 30% for 10 seconds.

Passive 1: Wrath of the Touched

Small chance to greatly increase the power of an AoE ability.
Rank Needed: 10

Reviews from a class tester: Summary by Osu

From the testing I've done so far I feel like Daimon is a sustainable class.

Before you need to heal up, mana regen feels really generous as the 27%-ish crit helps you regeneate mana quickly. But the healing seems generous, around 2K with full Wizard which is more than enough considering the cooldown is 12 seconds.

And if you time your Shattered Reality, you can sit on a rather low chunk of Health without risking getting one shot. Overall damage in my opinion is a "fun" damage, the 12-6 second tick difference on Brainwave is brilliant. And Mind BLOWN makes the real difference in my opinion, the 30% boost to Haste and Crit chance can really turn a battle around if timed with previous skills.

I think this is a overall fun class to use. I believe some players may not think this is their favorite since it's not doing incredible amounts of damage at a quick rate, but I do think it still is a fun to use, stable class. And considering MindBlown's increase to crit chance, your mana jumps right back up if you land some good hits.

Arklen and I had a blast designing this class, and we're very grateful to the testers and balancers for their help! We hope you enjoy it, and if this isn't the gameplay style for you... look forward to the next class variant - Drakel Warlord! Below is some Daimon lore I dug up while researching Ziri's NPC. Learning time GO (thanks, Wikipedia)!