Friday: The Armies of Evil are Recruiting... and they want YOU to join!

You are summoned to the Tournament of Evil this Friday on the Isle of Sierra Umbra! Battle members of the Undead Legion or Nulgath Nation at the ShadowBlast Arena to test your skills and see if YOU have what it takes to join them.  The Shadowspire Arena is neutral territory - you'll come not to make war, but to revel in the power of DARKNESS!

If you walk in the shadows or ally with Evil, this is your chance to prove to all where your true allegiance lies: with Good, Chaos*, or… Evil! 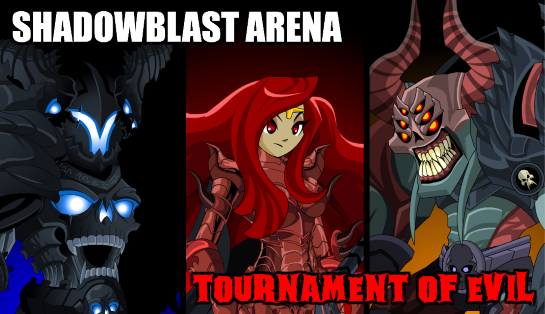 For Heroes who have believe in the paths of Good or Chaos, a separate annex has been set up for you to train in... however - the Evil warriors, mages, rogues, and miscreants may try to sway you to their side. This IS a recruitment drive, and we expect only the most noble, pure, or chaotic will be able to withstand the temptation of the dark side!**

Didn't Dage and Nulgath Fight a War Against Each Other?

Your memory (or Google-fu) is excellent! Back in 2012, the Dage vs Nulgath Summer War pitted both sides against each other in a number of incredibly heated battles. The rivalry broke out of the game and into the community itself for an all-out war of darkness, excitement, and pixel-based rage.

In the years since, Nulgath the ArchFiend has established a homebase in Oversoul while Dage the Evil rules the Underworld in AQWorlds. But loyal members of both armies remain very active. This Friday's release is an opportunity for ALL Evil heroes to focus on what REALLY matters -  recruiting new blood and souls (no one wants "fresh meat" anymore... right?! O_O) and proving that THEY are the strongest and best warriors for Evil this world has ever seen!

It would not be an Evil recruitment tournament if our heroes weren't given the option to join the Shadowscythe! Our three main evil armies will all be represented in the Tournament of Evil this Friday (we are also planning Good and Chaos recruitment tournaments, too). The emphasis of this release is on recruiting for the war against the Queen of Monsters - not in an artist vs artist clash. We want to give you guys the opportunity to root for your teams, but we have to keep the REAL enemy in mind - the Queen of Monsters, not each other.

The day of reckoning is coming, and the forces of Evil will need the strongest, most powerful heroes to fight for them... or Chaos. Will. Reign!

Just Tell Me About the Rewards!

You got it! We know you guys want wicked-cool gear, and we've got a some really sweet rewards coming for you! Battle to unlock all-new items inspired by Dage and Nulgath's art - keep an eye on the Design Notes for previews this week!

* The team is still working on the next Queen of Monsters Saga, so we will return to that later in January. Since Nulgath's birthday is this month and Dage's is in March, this is a perfect time to introduce all our newest heroes to the Nation and Legion the darkest battle showcase ever!