The final battle for DoomWood has begun....

Go to LightGuard keep. The teleporter on the second floor will take you to the unpredictable final battle... it is unlike anything we have done in AQWorlds before -- and we hope you enjoy it!  If you are not caught up in the storyline yet, the teleporter will tell you where to go and take you to the right place. Hurry! Vordred and Artix have already begun the final battle!! 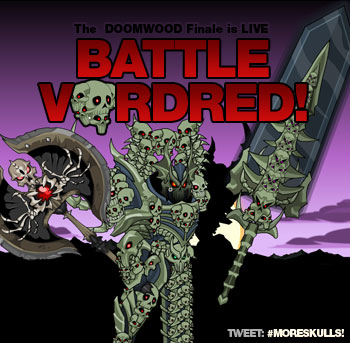 A BOSS BATTLE unlike any we have done before!

I am looking forward to playing this release alongside you... literally. This boss fight is truly different from the others. It will just be you and I against Vordred. (However to team up with your friends using /goto and play it together) There are multiple endings... each ending has a different cutscene and unlocks a different reward shop. You must be at least level 20 to survive the battle.... unless you are REALLY good! It is always scary trying something new... so please have fun and tell us what you think. No matter what happens, I believe in you Hero!

Tipping my helm to the team... thank you or all your hard work

At 4:30am last night, when the entire team was still up working hard on this release... I felt that special feeling in my soul. As a collective group, we broke the AE record for the most hours of lost sleep in a single week. I am really proud and you guys... and grateful for the opportunity to work along side you. To everyone who worked on this release... Cysero, Alina, Zhoom, J6, Nulgath, Samba, Dage, Mennace, Reens, Yorumi and special thanks to Warlic, Ghost, George Lowe, Llusion, and everyone else who put their all into this release.... thank you! For your reward... we will get even crazier and make the next saga even better! BATTLE ON! 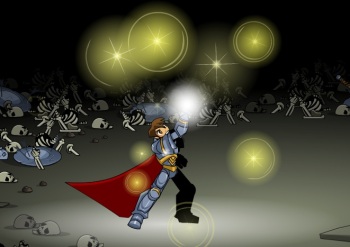