It’s Tuesday! And you know what that means: the second week of the Limited Time Artist Showcase Shop is underway!

This week’s featured artist is AQWorlds’ own Memet, who unleashes beautiful magic every single week in our new releases. Memet loves what she does—and now you get to gear up in an exclusive Armor Set that you’ll love, too! 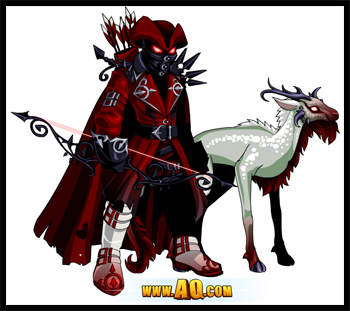 Just log into Battleon and click the big red “Featured Artist Shop” button with the countdown timer! You can’t miss it!

Memet is cute and cuddly on the inside and out! Memet is not actually a Moglin, however—she is a baku, a dream creature, who changes her shape to suit her needs. Memet usually appears as a Moglin because she's found that people are very friendly and helpful to her in that form… because her real form is much more frightening!

Memet is a local Secret Underground Lab artist who has been producing AQW artwork since November 2012. But Memet didn’t start off as an AQW artist—she knew Nythera and Zazul from school and they helped her land a job in Player Support 3 years ago. But as soon as Alina and Cysero discovered Memet’s artistic talents, they quickly stole….erm, permanently borrowed…Memet and she joined the Artist team! Memet likes working with so many creative, talented people, and loves how everyone supports and encourages each other to try new things and to grow artistically =D

Every Tuesday, AQWorlds releases a special Featured Artist Showcase Shop loaded with items that an Artix Entertainment artist creates using their own style and flair. Our wonderful artists get to unleash their creativity to make some truly amazing Armors, Weapons, Helms, and other Items just for you! But these items are only available for a limited time, so get the gear while there’s still time!

Last week’s featured Artist was Vokun, and he released undead pirate gear for landlubbers and seadogs alike. But for those akin to nightmares and mystery, you will absolutely LOVE Memet’s Nightmare Hunter Set! Give Memet a Tweet on Twitter, too!

Travel to Battleon now and get your Magic on!