The ArcAttack event is now LIVE!

more than 23,000 player are currently online after a vyer interesting and revealing Q and A session with the members of ArcAttack where literally THOUSANDS of questions were gathered by the Devs and Mods from all different servers and from Twitter.

Once again, you guys did a great job of making us look good. Your enthusiasm for the event really surprised ArcAttack and they put as much thought into their answers as you did into your questions.

But that is over now and the ArcAttack Event is underway! 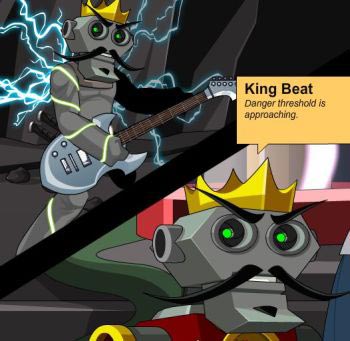 DoomWood continues with special guests, ArcAttack, whom Vordred us using to cause electro-musical mayhem in CastleMania!

We've got 5 special cutscenes with voices and music by the band themselves (Special Guest appearances by Galanoth as Vordred and One-Eyed Doll's Kimberly as Sally) , an Event Rare shop with 22 GUARENTEED RARE AC ITEMS... 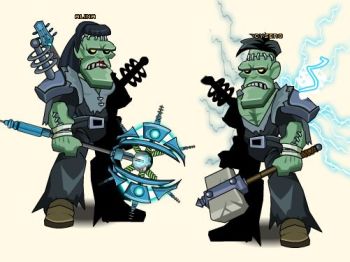 ...10 Non-Member Drops including 2 brand new armors, 14 Member Only Items, a Member-Only Backstage Area with Vordred Outtakes where you can stand in the Faraday Cage and take a screenshot with the band NPCs, and an event Achievement Badge (Book of Lore and Character Page!) for everyone who completes the event!

Play through the entire event to see what happens when Vordred tries to use ArcAttack's electro-musical research to increased his powers of undeath and get prepared for next week's DOOMWOOD FINALE!

Today will be the beginning of AQW's ArcAttack Musical Event, and if you have been following Artix's Play-By-Play you know exactly whats going on. This is the final ArcAttack band member spotlight. This mysterious... man, probably... is known only as 7. 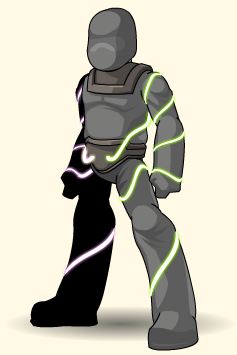 Not much is known about 7, other than the simple fact that he is without a doubt the bravest person that the band has ever know. Or the stupidest. Or both.

In ArcAttack's live shows 7 is always seen wearing his Faraday Suit which insulates him from very probably harm and allows him to perform in-between their giant Singing Tesla Coils as electricity crawls, arccs and snaps across the surface of the suit and the Lightning Guitar. 7, wearing the protective suit, is the ONLY person capable of playing that instrument without risking permanent damage.

Within the walls of Castlemania, he assist the band's electro-musical experimentation as a volunteer guinea pig and test subject. Who knows what effects these experiments have had on this chain-mail-masked musician of mystery beneath his Faraday Suit.

Get Ready for an electric explosion of AWESOME!