Adventures, Bosses, and Classes- the ABCs of AQW combat!

Over the course of the last few years, we’ve made many major feature changes and mechanics changes that have drastically both improved and changed gameplay. Because of this, and in an effort to better communicate with the community and be transparent, we’d like to start doing Dev Blog posts before major mechanics changes or class changes. 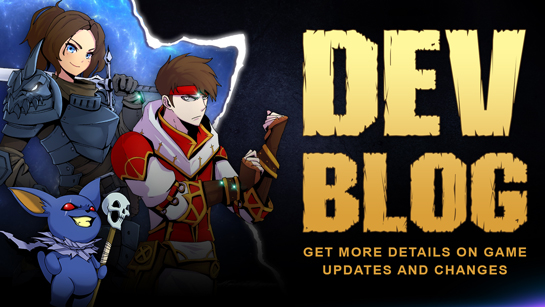 We’ll discuss the changes we plan to make (broadly), why we’re doing them, and ask for your feedback on them. Currently on the plate is class rebalancing for November.

November 2021 almost closes us out on a major year of changes, gameplay modes, and major class availability shifts. So first, a year-in review of the major changes to date, and why.

Awe Enhancements updated earlier this year brought a range of new build options that players could consider, and created new variety in how classes could be optimized. The purpose of this project was to introduce an element of player agency to the game, and make the awe enhancements a strong part of both progression and gameplay.

This is part of a larger, long running effort to bring back all unique classes and gameplay to the game, so that newer players aren’t missing out on the fun.

However, in the process of updating the calendar classes, several of them have been brought beyond the power levels we’d intended for them. Because of this, we plan to redistribute their power a bit in the next few months, and mellow out their performance in certain areas while buffing their performance in others.

Then, in August, we rolled an update to Alina’s Armory in /alchemyacademy that made potions more widely accessible to players. This update was largely focused on increasing the number of potential builds by giving players more accessible Potion Slot options, as well as a meaningful place for them to spend gold.

Prices of the potions were balanced to reflect gold income through popular and optimal spots, while prices of Dragon Runestones (and Arcane Quills) better reflect players who don’t have access to high level gold farming, and would instead choose to spend their time creating potions to save gold.

With this update, we intend for potions to be used in challenging gameplay, and sometimes normal gameplay, giving us more options in building challenge monsters as well. Challenge bosses are generally intended to be beatable without the use of potions, but they may give a great boost to those who want to invest their time and gold.

In addition to the Potions Update, we began a series of challenge bosses in August that featured special skills, mechanics and rewards.. We have many plans to expand this system going forward, and are already expanding on the kinds of abilities we can give bosses, kinds of rewards we can give you, and the challenges we can provide to all the high level players out there.

This update is going to be a mainstay going forward, but we do NOT intend for it to replace the style of content we’ve developed up until now. We’ll likely be giving parallels of rewards to classic AQW style farming, and challenge boss rewards, so that players may choose how they play the game. Challenge boss content is intended to promote social activities, guild activities, and late-game progression, and will cover a range of levels, not just endgame only.

Up until now, we’ve been doing one challenge boss per month, and occasionally for major saga finales, but we’ll be looking to slow this down a bit as we go into 2022, since we’ll have created a wealth of daily and weekly content for players to play with their friends to clear. We hope you will continue giving us feedback, so that we may continue to create more fun and challenging content for everyone.

In addition to all of these, we’ve been steadily making server changes to fix bugs in gameplay and improve elements of gameplay, from fixing haste stacking and rebound-kill aura application, to improving disconnect mechanics and adding better stat interfaces for players.

The server updates have led to several classes becoming more or less powerful than they were originally intended to be, and we’d like to adjust them back to where they should be. Please understand that these changes bring the classes back to how they were, and are not isolated changes.

And now, moving on to proposed changes-

Finally, this brings us to the current and upcoming updates to discuss. In the coming few weeks, we’d like to do another wide sweep of late-game classes that are overperforming and underperforming and bring them closer to levels that make sense by progression.

Dragon of Time is a class that’s fairly late-game and quite difficult to get. While we don’t intend for this class to be a replacement for endgame classes, it’s currently performing under the level that we’d like it at. Because of this, we’ll be looking at raising its direct damage output to raise its performance in farming. Soloing performance is not far off from where we intend, so we likely won’t give it any soloing-focused buffs.

Yami no Ronin is another late-game class that’s performing slightly under where we’d like it, and has a few description errors, such as Flash actually increasing damage taken by up to 100%, instead of 60%. Because we normally balance by performance, we’ll likely update the description, but we’d also like to give it a performance buff focused around its defensive play mode. So instead of leaving the damage taken at 100%, we’ll look at lowering the effects of Flash a bit, while increasing its passive skills, to increase its base performance.

Legion Revenant is an endgame class that’s scaled fairly poorly with the recent updates to features and mechanics, and is now performing under where we’d like it to be. Since farming is its primary role, we plan to make it shine more in that category, rather than being just a generalist class, so we plan to give its second ability AoE capability.

Then, the overperforming classes-

Chaos Slayer is an earlier late-game class that has grown disproportionally powerful with recent game engine updates, and feature updates. Because of this, we plan to lower its direct damage output in its AoE state, while giving a few quality of life features. We’d like to make Chaos Blight only accessible during its single target mode, as it's a DPS-focused mechanic on the class, but we’ll give it a weaker damage boost that will still be present in AoE mode. Additionally, we plan to make its heal activate 100% of the time, but it will be weaker in compensation. However, the final healing over time output will still be the same.

Void Highlord was recently heavily buffed and is currently overperforming past its intended mark, both due to the buff and to some server bug fixes. This is partially due to having new, longer fights in the game that were previously not present (and so were not heavily accounted for, as we were unsure of the direction they would take). Because of this, we plan to decrease the power of Abyssal Sacrifice. Additionally, we’ll make Abyssal Sacrifice affect all damage dealt to the enemy, not just physical.

Vampire Lord is a midgame to late-game class that grew extremely, disproportionately powerful with the recent game updates because of how the class operates. We don’t wish for this class to outperform other late and endgame classes, so we plan to adjust its power a little bit to compensate. Its base performance is actually not far off what we’d like, but its scaling with Awe Enhancements and potions are what we’d like to address. Because of this, we plan to raise its autoattack cooldown a bit.

Chrono Assassin is a midgame to late-game class that was strongly buffed by the haste stacking server fix, and now has max haste when it was not balanced to. Because of this, we plan to slow down the class just a little, back to where it was before the server changes, and fix several bugs in the class.

Chaos Avenger is an endgame class that was balanced around Void Highlord's current performance levels. Due to the fact that we're changing Void Highlord, we're looking at changing Chaos Avenger's overall damage output so that it is still proportional to Void Highlord's. Additionally, as many of you noticed, Chaos Avenger’s taunt was made non-loopable. We intend this as the first to a series of updates to various classes with taunt abilities, so that it can create more timing based mechanics, instead of spamming taunt skills. However, in doing so, the taunt on Chaos Avenger is currently on a skill that makes using it unwieldy. Because of this, we’ll be revisiting this change and resolving that issue - so you don’t feel like you’re losing out on damage in order to save your taunt.

In the next few weeks, we’ll be taking a look at taunts on various classes and adjusting them to provide a more interactive gameplay experience. We are looking to phase out loopable taunts as a whole, as they effectively remove the threat of any challenge monster with multi-target attacks.

We’d love to hear your feedback, and look forward to having a more direct dialogue with you all, to better build the game together with your input.