Along came an AQLITE Spider...

We are integrating AQLite’s features into the official game client

Yes, really. Read on for an interview with our newest developer, Spider, the creator of a client mod so good, we hired him outright to help us take AQWorlds into the future! 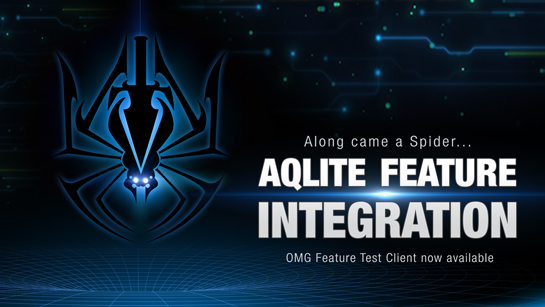 Artix: So, did you guys hear that we contacted the creator of AQLite.... and we started working together to make it the official game client for AdventureQuest Worlds?

Entire Playerbase: You are Artix Entertainment... when the @#$% did you start doing smart things?

Artix: Right. So... here with us today for an interview is Spider, the creator of AQLite!

Artix: Players want to know about AQLite? Can you tell us about it and the story of how it started?

Spider: So, I made AQLite because I wanted to add a custom drops UI, because I had this really good idea, and I didn’t know where I could go to implement that idea. So I decided I could just try my hand at it and add it in myself.

Artix: How did it catch on and spread like fire through the playerbase?

Spider: Eventually I showed it to the AQW Reddit and everyone seemed to have really positive feedback. So I thought, why don’t I just keep updating it, keep adding onto it. And maybe eventually we could add it into the game.

Artix: It got big! So big that superstars from our community were using it...

Alina: Right! That’s why we took a closer look at it. When we saw it wasn’t a bot, and didn’t give some players an advantage over others, we made an exception to the “no third party programs” rule. That way, anyone who wanted to could use it without getting in trouble.

Artix: And man, a lot of people have been using it.

Alina: Yep. Players kept messaging us about it, and I’ve had a lot of our team members over the last two years ask me when you could join, too. We all saw how awesome your work was, and how much players loved it. We just needed all the puzzle pieces to fall into place before we could reach out to you.

Spider: About that... Sometimes, very rarely… I check my Twitter DMs. I almost never do, and it’s on me for not responding. But sometimes, I get suggestions there, too.

Spider: Yeeeah. We got really lucky. One of the few times I checked, I just happened to see your message.

Artix: Tommy Wiseau stopped responding to my private messages too.

Spider: It’s still hard to believe this all happened. I’m just so happy that so many people like it. And that you guys like it, too. It’s kind of mind-blowing.

Alina: It’s so clear how passionate you are. I can hear it when we talk, and it shows in the project. It’s no surprise that so many people love it!

Spider: At first, I didn’t expect it to be as big as it got. But everybody seemed to love it, and it started spreading by word of mouth. When I’d go to Youtube, I’d see videos of it, and people kept talking about it. And it just… wow, it made me really happy. It’s just a client filled with the most requested features from players.

Alina: Which is exactly why they love it so much.

Alina: So, I talked to Artix and we both had the same idea. We should reach out to you and see if there was a possibility of us all working together.

Spider: I felt really happy when you did. I thought “this is it, this is the moment!” But my friends were like…. “Are you sure they aren’t trying to, you know, SUE you?”
(Alina's note: We were not.)

Artix:  Can you tell us what improvements the AQLite client brings to AdventureQuest Worlds?

Spider: It's really hard to just say everything out. I added a bunch of features, as well as wish list features from players into the game. I’ll send you a list to include in the Design Notes so everyone can see what’s new!

Artix:  I was really happy when we got to talk on Discord for the first time.

Spider:  It felt kind of… real, if that makes sense. Maybe surreal. I was seven when I started playing your games. But in my head, you were just your NPCs. All I see is your NPCs when we’re talking.

Spider: And all I could think about when we got into that chat with Zhoom is, “he’s probably going to give me some quest for a ranger class. He does that in EVERY GAME.”

Artix: My mother happened to be visiting while we were on that first call, and I told her this reminded me of that first call when I met Captain Rhubarb. You really made an impression.

Artix:  I realize this is going to come as a shock to a lot of players, but what you does is exactly how we started building releases for our game community in the first place. You listens to player feedback and integrate the features and improvements into the game.

Spider: I should probably mention, I don’t always reply, but I always read the messages I get and I read them (except DMs). I’ve taken it in and put it onto my giant Trello Board of Ideas (™)... I just don’t always reply.

Alina: How about in game? Do you talk much to players there?

Spider: My in-game name is 133spider. When I was in Battleon, a guy messaged me and I thought he was going to ask me about AQLite. But he thanked me for making DragonFable Cheats! That really surprised me. I haven’t made cheats in years.

Artix:  One of the reasons Alina and I had the conversation with you was because AQLite was not a cheat tool, but a really high quality game client with tons of improvements that players want.

Spider: Full transparency, I had created custom servers in the past.

Spider: I am pretty sure a lot of people might already know that. If it wasn’t for those experiences, I wouldn’t have the knowledge I do today.

Artix:  You were younger back then. You should tell them what your job is now.

Spider: I work as a cyber security teacher for a local college.

Artix:  Throughout our community there are a rising number of talented individuals who did some... um... rule-breaking things in the distant past, who have grown into people that the team and I would like to work with.

Artix:  Alina, when will the new client be ready for everyone to test?

Alina: Right now! As soon as players stop reading this, they can log and test out the new official version of the AQWorlds client with all of the AQLite features on the official launcher.

Spider: Well, all features except for that one feature related to mount speed. And the profanity chat filter toggle for players 18+. We're saving the introduction of that for after Nythera gets back from vacation next week.

Artix:  How long have you been working on this?

Spider: I started working on this over two years ago.

Alina: And we contacted you almost exactly 2 weeks ago. At this point, you’re at, what, a little over 100 hours into the porting? Must be, because I don’t think I’ve seen you sleep at all.

Artix:  What was it like working with the team?

Spider: So far everyone has been so welcoming and constructive. I've been working with Captain Rhubarb, Yorumi, and the testers.

Artix:  Well, your hard work is officially live and officially supported now. Alina, how can everyone try this new game client out?

Alina: It is a special button on the Artix Games Launcher right next to the normal "Play" button for AdventureQuest Worlds.

Spider: We should probably mention that using the old version of AQLite is going to break the game. So everyone should go log in and play on the Spider Test version of the official AQWorlds game launcher.

Artix:  There are only two things left to say. Thank you, and welcome to the team, Spider!

Soon: Players who are 18+ years old will be toggle the profanity filter on/off.

Artix: Bonus Question.... 133spider? I need to know. How did you come up with that username?

Spider: My username actually takes me way back to when I first started PC gaming ever. When I went to register an account for an online game, I didn’t know what my username would be. My oldest sister came up with the mix of my birthday date (13th of September) and my favorite childhood superhero which was Spider-Man. She came up with “133spider” and I’ve used that name for the entire time I’ve been on the internet. So, my in-game name is “133spider”. Not to be confused with anyone else.

Spider: Actually, it is one three thee spider.