Check out the new details of the Arcane Dark Caster Class buff, arriving tomorrow! Zereldo and Arklen teamed up to bring you a post full of the news, numbers, and info you've been asking for! 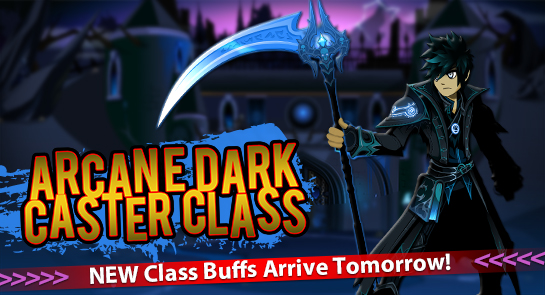 Hey everyone, it’s Zereldo here and today I’m going to be taking you through the changes we have made for the Arcane Dark Caster Class. For those of you who don’t know, I am the Lead Class Bug and Balance tester. We’ve heard your feedback and after reading hundreds of your tweets and suggestions, and doing a lot of extra testing, we have a round of buffs for you. Below are the changes, followed by more detailed explanations of why we’ve made them.

A lot of complaints focused on the poor mana management of the class. The mana cost reduction for Envelope In Darkness may seem small but, since you use it so often, it makes a noticeable difference throughout the course of the battle. Removing the mana cost of Arcane Overwhelming also means that when you are in a hard spot and in desperate need for more mana, you don’t have to worry about waiting to get it back.

A lot of you complained that this class simply did not have the damage output you thought it should. You’ve probably noticed that the damage increases we made are seemingly mild. What became apparent once the class went live was that it was extremely hard to keep both Envelope In Darkness and Summon Arcane Shadow Minion fully stacked.

Now that the stun duration has been reduced to 4 seconds instead of 6, you should be able to keep both stacks going to increase your damage and survivability. After seeing how much this impacted the overall damage we found that sweeping damage buffs were not needed.

We did find that giving Aracne Overwhelming a boost to DoT damage from 30% to 50% improved that feeling of overwhelming power and frankly, was just fun. This will help with overall damage and mean you are doing more damage in that brief period while you are stunned.

What about AoE? And other changes you did not include?

Many of you wanted AoE moves on this class. The class was designed as a single target caster with a focus on damage over time. If every monster on the screen starts attacking you, we would have to implement more defensive skills which would require a nerf to the damage, which would take away from the spirit of the class. Also, once a class goes live we avoid making major changes to it in this regard.

The feedback we received was mixed. We knew that the class was underperforming but not at a level that deserved basically scrapping it for a new class. We’d much rather improve what already exists instead of making huge changes. We also need to consider that altering even one move to AoE has massive repercussions on the way the whole class functions, and would require an entire rework.

Just because your idea or feedback was not used in the buff does not mean it was not considered. I personally read and considered every tweet about Arcane Dark Caster that was sent to my twitter since the release of the class, and I know that the rest of the team read and responded to many tweets, too.

We spent a lot of time testing out various buffs and these are the ones we felt enhanced the already established gameplay of the class while addressing its shortcoming. I really appreciate the enthusiasm and effort you guys put in into helping get this class where it needed to be.

Rest assured, once these changes go live we will be monitoring your feedback closely to make sure this class is where it needs to be.