AdventureQuest Worlds turns 12 this year, and our anniversary celebration begins October 1s with our 12th Upholder promotiont! Then, return this Friday, October 2nd as we start our month of gifts, events, and more with the return of our Mogloween hub town and... a new Tier 2 class -- the Dragon of Time! 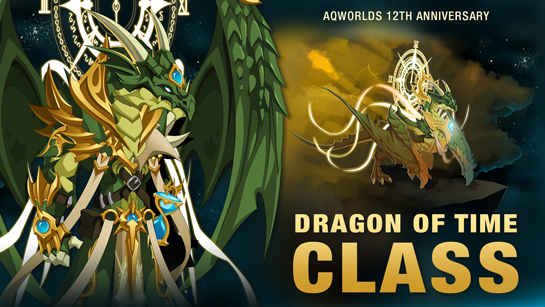 As the embodiment of time itself, you’ll be able to wield the power of bending, tearing, and twisting destiny and space to your bidding. To unlock the class, talk to Kro’nar in /yulgar to begin their quests. Each quest will reward pieces of the Dragon of Time set with the 9th quest rewarding the class.

You'll need to have the 13 Lords of Chaos saga completed to unlock the awesome power of the Dragon of Time Class, but all heroes can begin Kro'nar's quests to collect the armor set pieces.

The quests will get progressively harder as you advance down the chain, and the class should be a handy (or claw-y) addition to any high-levelled player’s kit!  The quests will have you travelling all over Lore to experience the many destinies of different creatures, and learning about the ultimate fate of the Eternal Dragon of Time.

With a heavier focus on the difficulty of certain fights instead of simply throwing a huge number of monsters at you, the class should be faster to obtain than equivalents. A word of advice -- crossing timelines and finding other players to aid you may prove to be very beneficial!

Without further ado, onto the skills and gameplay!

Becoming a draconic embodiment of destiny, your skills and damage have a heavy focus on Damage over Time effects and manipulating those. While you start combat weak, you quickly pool enough power to compete with some of the most powerful classes, and maintaining that strength is your most efficient path to victory. Having control over the diverging and converging timelines of AQW translates into having control over the Area of Effect of your attacks, giving the class the ability to function as both a farming class, AND a soloing class!

Description: Recommended enhancements: Wizard, Healer, Hybrid. An evanescent fragment of your original self, captured by fate, you retain some influence over the tides of time. Torn by war, corrupted by Chaos, and reborn anew to walk Lore once more.

Mana Regen: You gain mana whenever an enemy takes damage from one of your skills.

Strike at 4 opponents' being with your force of will, Rending them for Damage over Time, stacking to 10 and lasting 10 seconds. Cannot crit.

Being a master of the timelines, using any of your skills will cause temporal damage to your foes, in the form of Rend DoT. This auto attack acts as a standard auto attack otherwise, but most of its damage comes from the DoT instead of immediate damage. The passives and auras will bring additional function to the basic skills, which you’ll soon learn about!

Tear through the boundaries between timelines, dealing damage to 4 opponents, sacrificing 10% of your health per target hit and Converge your successive strikes on a single target, removing all of your skills' area of effect, increasing your Magical Damage by 100%, and decreasing your mana costs by 60%. Further Rends all targets hit and cannot crit.

A harkening back to an old mechanic, this class features an AoE toggle for your skills! In exchange for dropping the AoE on your skills, you get +100% magic damage output, which will affect several of your skills and all of your DoTs, as well as a large reduction in mana costs. However, the class isn’t as straightforward as sitting in one mode or the others, as you’ll soon see...

Strike your opponent for unavoidable noncrit damage, and Rend them while pulling your corporeal form back together, healing you for half of your missing health. If your strikes are Converged, you gain Coalescence for 5 seconds, an additional small HoT.

This is your primary (and only) healing skill on the class. It uses a rather unique healing function, which will effectively scale with how much HP you can have, and is the best fit for a class that plays around with its health amount, to normalize its gameplay mechanically.

Breathe temporal fire over the battlefield, burning away your foes' and your fates, dealing light noncrit damage, removing your Convergence, and burning you for 10% of your health per target hit. The most intense flames affect your first target, searing their timeline and making them take 50% more DoT damage for 5 seconds. Their destiny remains alight, burning them for a powerful DoT for 7 seconds.

This skill will consume your AoE toggle aura, which will then bring back your AoE damage. This means that you will have full control over when you have your AoE and when you don’t, and when you have your damage buffs, and when you don’t. Additionally, this skill will also net you a large portion of your DPS to your primary target, in the form of a double-speed DoT and a weakness to DoTs. Bear in mind that switching in and out will cost quite a bit of HP, however, so they cannot be used completely freely. But you’ll want to be picky about your timing, as you’ll see in the passive abilities!

Lash out with the force of your vitality, dealing heavy damage to 4 opponents based on your current health while Rending them. Cannot crit.

Another harken to an old damage mechanic rarely seen, this skill will do damage based on your current HP number, instead of any percentages. This acts as a pseudo-nuke in both single-target and multi-target combat, and the AoE is modified by the presence of Convergence. Using it while in single-target mode will net you more damage, but you only hit one target.

Note: When Converged, these skills will apply their corresponding effect:

You split your life to preside over the providence of the many, reducing your base Endurance by 50%, and increasing your Haste by 15%.

At the pinnacle of your power, your strikes are 15% more accurate, and using your abilities wears away at your foes’ existential resilience, weakening them. The Principles of Time, Space, Gravitation, and Dimensionality heed your command.

Note: Upon reaching rank 10, your skills all have a 20% chance to apply a random debuff to the enemy, each lasting 7 seconds:

Last but most certainly not least, the passives are what will completely tie the class function together. Reading above, each skill has its own individual function, but with the knowledge of the passives, you will learn to constantly switch in and out of Convergence to maximize your damage. Being in Convergence means you sacrifice your AoE, but you gain Endurance buffs to increase your maximum HP, increasing your survivability. Being out of Convergence means you stack Discordance, increasing your DoT damage by a very significant amount. Your rank 10 auras are the only form of damage mitigation that this class gets, so much of your tankiness is going to be directly gained though increasing your HP to tank hits, and then healing it back at the right time with Dragon’s Will. Weaving in and out to maintain uptime of the different effects will net you your most optimal performance, all while being careful not to accidentally sacrifice yourself in the process!

Being the 12th anniversary class, we wanted the Dragon of Time to be a class that could be rewarding to unlock and play for a large number of our players, and so it will be a powerful, farmed-only class that should remain useful for a long time.

Design decisions taken during the concepting process reflect this desire for accessibility, and so several mechanics exist to prevent the class from being too hard to play, while not being entirely spam-happy either.

This class was certainly an interesting one to design and balance, featuring many old mechanics that haven’t seen designs in the recent few years. Dragon of Time offers a strong incentive to constantly be weaving in and out of its two modes, while taking the benefits of one to utilize in another.

Playing the class is all about finding a balance in what skills you should and should not be using in either of your modes at any time, and managing your stacking auras to maximize damage across targets.

Note: this class is intended for experienced heroes and is only available by completing Kro'nar's quests; there is no Adventure Coin short-cut.