They say music has the power to change the world. The rising star band, One-Eyed Doll, along with the entire AQWorlds team, and over 20,000 of your closest friends will be online for the ultimate battle against Chaos Lord Discordia! Be a part of our world's history as it happens... LIVE! This event is available for all players. (and Members will get a VIP backstage pass for after the show.)

The event was a success!

Mythsong Canyon: In the beginning...

All of the greatest bands in the world are gathering in Mythsong Canyon for the most incredible concert of all time -- Lorestockapalooza! Well, that was the plan until ALL of the worlds bands suddenly dissapeared! We suspect this is the handywork of the newest Chaos Lord, Discordia! Now we are traveling to face this powerful foe in his Opera fortress... personally!

... and One-Eyed Doll is coming to help! 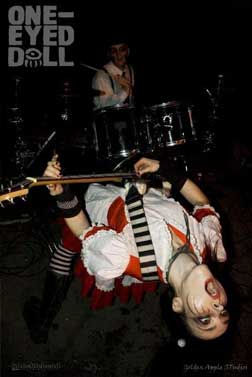 singer of One-Eyed Doll, the #1 punk rock band from Austin, Texas. Armed with her guitar, sweet voice and little hair-holdy-in-place things she and the band will be singing and cheering the heroes on to victory against the most unpredictable Chaos Lord we have ever faced! It is rumored that this Chaos Lord has been balanced so it will require 20,000 players battling together at the same time to defeat him!

Ultra Rare Items available during the event only

There will be ultra rare items and an AdventureCoin shop that will only appear during the event. Once the event is removed from game, those ultra rares will never be available again.

The first time the AE team saw Kimberly, she was being escorded into a metal cage between two tesla coils by a mad scientist/muscian named the Arc-attack. A thousand people looked on as bolts of lighting shot at the cage creating computer controlled frequencies that "shockingly" played the themesong of Back to the Future! Kimberly giggled and danced as lightning struck the metal bars creating the music. That was "normal" compared to watching One-Eyed Doll play live afterwards. She hypnotized the audience with her sweet and kind voice... and lured us to our doom. There was an explosive energy that we had never seen in real life before. After only 2 songs we were informed that they had run out of time and everyone had to leave so the band could clean the room up. Cysero's friend Alces stirred the crowd into a chant "YOU PLAY, WE'LL CLEAN!" promising that we would clean the room if One-Eyed Doll would play us another set. They agreed and as soon as Kimberly struck the first chord, the mezmerized audience went to work cleaning the floor, stacking chairs and helping Arc Attack take down their musical tesla coils (Cysero proudly brags: I got shocked by the one that wasn't properly grounded!) That place was spottless before the crowd left at 4am!

The original songs come from One-Eyed Doll's newest album, "BREAK". You can download this and their other albums on their website for however much you feel like donating. (Sort of like what Radiohead did... which is really cool!) While you can download the new album for $0 we highly encourage you to support the band (We did!)

Songs used in the event were carefully chosen to be suitable for players of all ages (including the youngest ones). This album and many of their other projects may contain lyrics and themes which are intended for a 13+ audiences. If you under 13 please return to our homepage.

Get your parent's or guardian's permission before going to One-Eyed Doll's website.